We regret to notice the death of our worthy townsman Charles S. Lawson, long well known in the district as an artist, paint and lithographer.
He and his twin brother James, long associated with him in business, were born at the Loch-side of forfar in 1838. On the day of their birth their father, a tailor, planted two rowan trees on the west side of the solitary cottage home at the foot of the Kirriemuir Road, leading up from the Loch by the farm of Turfbegg, and these trees were for some years conspicuous objects in the landscape. On the family removing to Dundee, the father carried on a business as a tailor on the Murraygate.
Charles was then apprenticed to William Scrymgeour, then a draper at the top of the Wellgate. Although attentive to his business Charles betrayed strong leanings towards art and antiquarian research. On completing his apprenticeship he took to the art of printing and lithography, which he readily acquired in the office of Mr Girdwood. In company with his brother James, he then set up in business as printer and lithographer. He published two works, which soon ran out of print., "Historical and Descriptive Guide to Dundee" and "Historical and Descriptive Account of the Abbey of Aberbrothwick." The first of these works was illustrated by 30 to 40 lithographs, and the second by 24 coloured lithographs, the original sketches, the authorship of the letterpress, and the lithographic printing being all his own work. He published numerous large colour lithographs of public events, public characters, and scenes. At Parliamentary and municiple election times he published many amusing cartoons, which were highly appreciated by the citizens.
One of series numbered thirteen. He being a Good Templar commenced a Good Templar magazine, which in compliment to his native Forfar, was titled after the first lodge of that town, viz.- "The Dawn of Peace." Mr James Scrymgeour was appointed editor, and the ventured promised to be a success, but a reverse of fortune stopped their business and the magazine. On obtaining a settlement the Messrs Lawson manfully struggled to pay of various of their creditors, although under no legal obligation to do so, and most honourably paid every farthing to the editor. Charles then betook himself solely to art, and painted pictures for sale. His subjects were chiefly nooks of Highland scenery, burns, clumps of trees, and lochs. By these he lived for a time. Several of his pictures graced the Art Exhibitions in the Albert Institute. A gentleman interested in antiquarian pursuits kept him engaged for several years sketching portions of old Dundee. These sketches consist of about 100 graphic views of ancient tombstones in the Howff, and about 200 to 300 views of ancient houses, closes, and lanes of Dundee, including many interesting interiors.
With Highland blood in his veins he joined the Dundee Highland Volunteers, to which corps he was greatly attached. Within the last year or two his memory began to decay and he became quite helpless, and on Wednesday afternoon nature suddenly gave way and he died in peace. He had four of a family, but the last Catherine, 13 years of age- a winsome girl, and a Wesleyan Sabbath scholar, was buried on Thursday afternoon in the burying ground, Constitution Road, and now, on Monday, the same grave will be reopened for the remains of her father. Peace to their memory. Much regret will be felt for Mrs Lawson in her double bereavement." 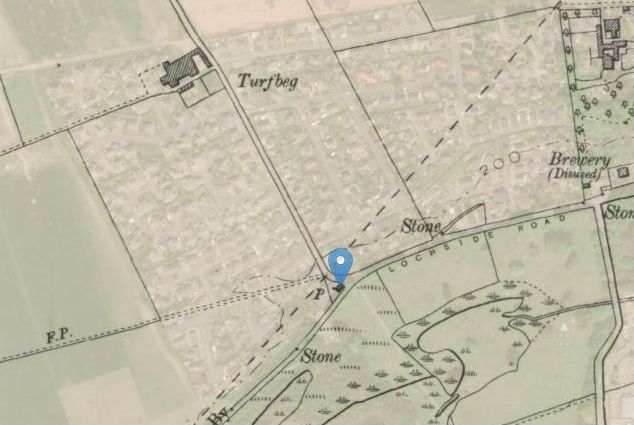 The above image shows the location of the property at Loch Side, Forfar.
The overlay Reproduced with the permission of the National Library of Scotland.**

Charles S. Lawson was married on the 27th of April 1866 and was announced in the local press, as well as further afield, this entry being in the Inverness Courier Thursday 10 May 1866.
"At 132 Murraygate, Dundee, on the 27th ult., by the Rev. J. Holmes. Mr Charles S. Lawson, Engraver and Lithographic Printer, to Isabella Mathieson, youngest daughter of Mr H. Mathieson, Gartymore, Helmsdale, Sutherlandshire." 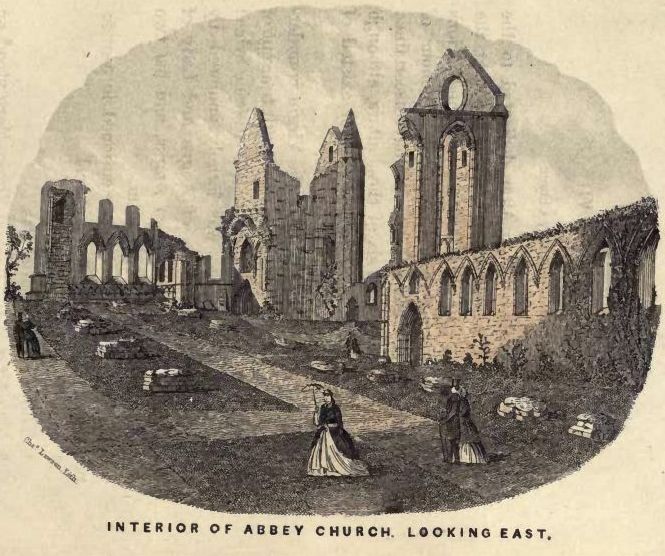 His book, Historical and Descriptive Guide to the Abbey of Aberbrothock was printed in 1868, the image above is a copy of one of the plates, and below is an advertisement from the Brechin Advertiser - Tuesday 28 July 1868:

Some of the work produced by C.S. Lawson was noteworthy enough to be mentioned in the local press, the following are some articles:

Montrose, Arbroath and Brechin review; and Forfar and Kincardineshire advertiser - Friday 05 February 1864
"Lithograph of Arbroath Abbey.—A very pleasing representation of the ruins of this once imposing Abbey has just been published. The picture has been drawn and published Mr Charles S. Lawson, Dundee—an artist whom we have before now had occasion favourably to mention. The drawing represents the interior of the Cathedral from the east; and all that remains of the southern walls very correctly delineated. The building on the picture is recognised at a glance by those who have seen the original. It will no doubt be a popular lithograph in Arbroath.— Dundee Advertiser."

Dundee Courier - Thursday 09 April 1868
"The London, s.s.—Mr Charles S. Lawson, lithographer, has published view of the London steamship, drawn by Miss Grace Richardson. The picture is fairly executed, and as a sketch one with little experience is very creditable. The London is gaily decked out in all her bunting, and appears to good advantage. The drawing is correct, and the lithographing has been fairly executed by Lawson. Sale of Property."

In the latter part of his life Charles was a member of the Dundee Amateur Artists' Association, with a notice published in the Dundee Courier in January 1878 advising of the "annual election of officebearers" which took place at their rooms, located at "6 Reform Street", which appointed Charles S. Lawson as treasurer.

Whilst searching the newspaper archive, this song was discovered, being printed in the Dundee People's Journal - Saturday 07 September 1861:

O, give me the night! then the weary may rest,
Whose toils of the day have been doubly blest ;
Then the maid, with Her lover kiss fresh on her brow',
Retires to her chamber—she’ll dream of him now—
As she sleeps a sweet smile wall lit up her face,
And her hopes for the future in visions she’ll trace,
And when she awakes her fond heart will be light—
O, give me the night, love ! the beautiful night!

Lawson, Charles S. (1868) Historical and Descriptive Guide to the Abbey of Aberbrothock. P.58.