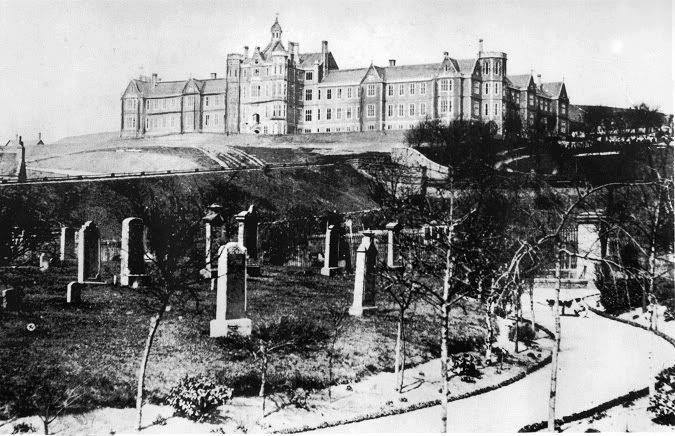 The Howff, having undergone its remodelling in 1834 was still being heavily used, the town required an extension to the burial ground. A site further up Constitution Brae Road was chosen. Originally the site of allotments, the land around two acres in size was purchased, by December 1835 tenders were being sent out to have the area enclosed.
The initial opening of the ground was in April 1836, however the enclosing walls were still being erected so a portion of the ground 80 yards square was fenced off to surround the first interments.
The west wall was built to around 10 feet in height and still survives today. This wall was purposely erected to this height to allow the erection of vaults and tablets. The south, east and north walls were erected with a parapet wall and railings. The east gate was to be the main entrance.
The ground was laid out in the style of a Victorian garden, with curving footpaths, planting of ornamental shrubs, trees and landscaping. A mortuary was built at the south side of the ground.
General burials ceased at the beginning of June 1864, however rights for burial were still retained for owners of lairs with the last burial being as late as 1938.
By the start of the 1960s plans were being put into place to clear the land to make way for a carpark, this being completed by 1963. This carpark was eventually cleared and the bodies were exhumed in the early 1970s. The remains were re-interred within the common ground in the Eastern Cemetery. A multi-storey carpark and the inner ring road were constructed on the majority of the site. The excess soil was removed and disposed of at the then Riverside Drive Reclaimation site, after being sifted through by students to remove any remains.

Thankfully before the site was cleared some 270 memorials were transcribed around 1960, these have been added to their relevant plots in the database and are reproduced here with very kind permission of Dundee City Archive.

Also added to their relevant plots are inscriptions from a transcribed copy of Sidney Cramer's notebook, Old Bell Street, Dundee [TD73/8/1]. Sidney recorded around 300 memorials in the 1950s. They are reproduced here with kind permission of the Scottish Genealogy Society, Edinburgh.

The image below shows how the New Howff cemetery appeared while in use, from around 1890. 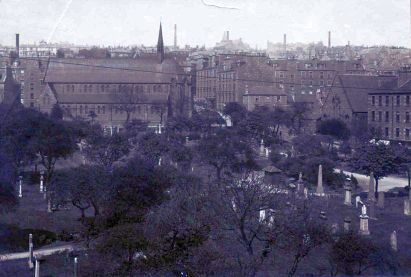 Image is reproduced with permission of Dundee City Archives. 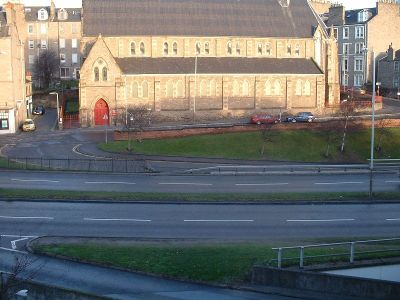